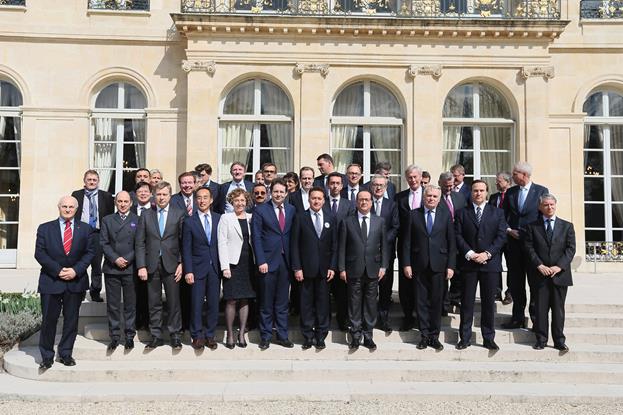 DP World Group Chairman and CEO HE Sultan Ahmed bin Sulayem recently met the President of France, Francois Hollande and senior government and business leaders at a major investment summit at the Élysée Palace in Paris.
France’s attractiveness as an investment location and DP World’s projects in the country were highlights of the discussions which also covered infrastructure development, port centric development, distribution and export hubs, rail freight, customs, and other logistics topics.
HE Bin Sulayem outlined DP World’s contribution to global trade, investment opportunities in France and the potential for further collaboration in the trade, transport and logistics sector.
HE Sultan Ahmed Bin Sulayem, Chairman of DP World, said: “France is an important partner in DP World’s European operations. Our existing investments in France’s container ports and how they can be given further impetus formed part of the meeting. Participants were keen to know more about our global experience and expertise in moving goods across continents, connecting markets and enabling trade.”
He said: “France has many attributes such as a skilled workforce, good infrastructure, proximity to the European hinterland and a unique position with coastal access to the Atlantic Ocean, Mediterranean and North Sea. It was a privilege to highlight our operations there and to provide our knowledge to this major economic power as it seeks to develop investment opportunities in the future.”
DP World operates marine terminals in the ports of Le Havre and Fos, responsible for handling approximately 50% of all of France’s container traffic.
The Port of Le Havre on the French north coast is ideally situated as the gateway to Paris and the industrial north. The port is rail linked and has direct access to the River Seine by barge to and from the Paris conurbation.
Générale de Manutention Portuaire (GMP), a joint venture between DP World and CMA-CGM, operates two marine terminals in Le Havre. The Terminal de France is the deep-sea container terminal, capable of handling the largest vessels. The Terminaux Nord also includes general cargo and Ro-Ro services.
The Eurofos marine terminal at the Port of Fos, near Marseille in the south of France is also a joint venture between DP World and CMA-CGM and is France’s southern gateway to the Mediterranean Sea. Eurofos operates the largest container terminal in France – 1.6kms long with 4 berths. It has direct barge access to the Rhone river leading north to central France including the major city of Lyon and road and rail links into the western Europe hinterland.
Trade between Dubai and France in the first 9 months of 2015 reached AED 15.30 billion.
The UAE is the largest market for French businesses in the Middle East with a quarter of French exports to the region. Over 5,300 French companies trade with the country, 60% of them SME exporters. The UAE also has 250 subsidiaries of French companies present in the country.